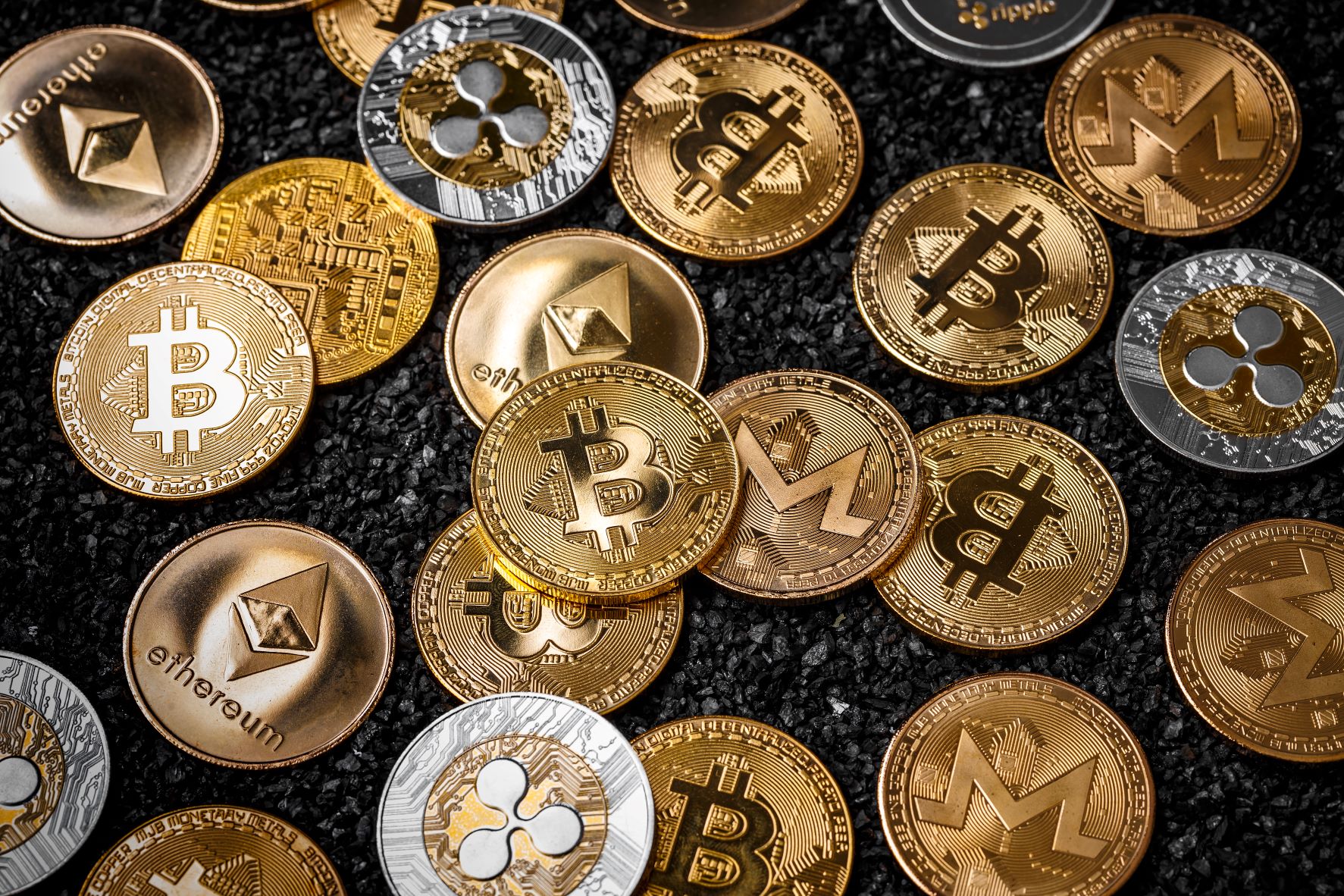 Coinbase provide financial infrastructure and technology for the cryptoeconomy. It offers the primary financial account in the cryptoeconomy for retail users; a marketplace with a pool of liquidity for transacting in crypto assets for institutions; and technology and services that enable ecosystem partners to build crypto-based applications and securely accept crypto assets as payment. The company was founded in 2012 and went public on the Nasdaq (COIN) via direct listing, April 2021.

Coinbase shares (COIN) on its listing debut closed at $328.28 on Wednesday, April 14, 2021. This gives the cryptocurrency exchange an initial market cap of $85.8 billion on a fully diluted basis on the day of listing. This was the result of frantic intraday trading activity, the shares opened at $381 and quickly shot up as high as $429.54, before drastically slumping down below the debut price, reaching lows around the $310 mark. Despite this almost 30% contraction, the price remained well above the reference price of $250 that was announced by Nasdaq in the days leading up to the public listing.

Like many major public listings, trading volumes of Coinbase shares on the day of listing and the next day reached levels that the market still hasn’t seen again. This is likely due to a large proportion of trading volume originating from large institutions. Despite the high trading activity, on the day after listing, shares fell around 1.7% to end at $322.75, reversing earlier gains of as much as 6.4% to $349.18, which were seen earlier the same day. The rest of the week post the public listing demonstrated further downward pressure on the shares, 10 days post the listing COIN was trading at $291.60, approximately 11% down from the closing price on the day of listing. This activity would then prove to last longer than expected and signal the start of a downtrend in the share price lasting around 40 days. During this period the markets also saw bearish activity in the cryptocurrency markets, Bitcoin over this same period had around a 40% retraction in price and therefore, further fuelling bearish trade activity in COIN. Coinbase stock reached its all-time low May 19th, plummeting to a price of $208 and closing the session at $224.80.

The stock saw a period of consolidation for the next 2 months, with the next possible catalyst for the stock being the announcement of the company crushing the Q2 expectations. Q2 results which were announced August 10th signalled strong performance, total revenue came in at $2.23 billion, beating consensus by around 20% at $1.85 billion. Despite the promising results, there was little translation seen across in the stock price, further suggesting that bullish movements in the crypto markets would be more likely in providing upside for the stock’s price.

Focusing on recent analysis spells positive sentiment for Coinbase. Driving onwards and upwards from an open of $232.89 (USD) on October 01 to a close of $330.99 on November 01 (2021), Coinbase Global stock has seen a surge upwards of +42.12% in the past month. And within such bullishness, trend channels on a day-chart are easily identifiable, reducing risk parameters for intraday long positions on this stock as well as more long-term investments in the cryptocurrency.

It seems that continuing upwards through a mild slowdown, due to resistance around the $250 mark within the 2 weeks commencing October 04, was the springboard required to form a price floor from which the cryptocurrency could skyrocket – jumping, for example, +6.38% on October 18. The biggest change, though, came a week later, in the form of a significant +8.21% hike.

It is undeniable that Coinbase is one of the hottest IPO stocks on the market at the moment, right on trend with the recent cryptocurrency surge. The recent market rally of Coinbase Global, though, is potentially unsustainable – due to arguable ‘over-hype’ of the stock causing artificial popularity as retail investors inflate the stock possibly beyond long-term price ranges. Such stock over-inflation is not new for Coinbase, and a price crash would only be a rerun of its initial, extremely short lived, IPO driven price boom. Though the future of Coinbase is uncertain, and undriven by any definitive ‘business’/market factors, cryptocurrency was once said to be a temporary bubble – and yet its long-term surge still continues today.

We assessed the impact of incoming emotional and information messages on the price of Coinbase. The assessment was done by gathering sentiment data using StockGeist’s REST API, proposing and backtesting from 15-09-2021 to 12-10-2021 and then validating from 2021-10-13 to 2021-10-31. Initially, we made stacked area plots of the incoming messages. A moving average as well as exponential moving average (EMA) were also plotted on the same axis. For Coinbase emotional and information messages followed in the same manner, and so for simplicity of the analysis, we concentrated on using only the emotional messages despite StockGeist offering various market sentiment indicators. The proposed trading strategy using sentiment data involved two signals. An initial entry signal if the normalised exponential moving average is above 0.4 as well as the EMA being greater than the moving average, and then an evaluation is made based on the sentiment of the current hourly sentiment data. If over 55% of the incoming emotional messages within the past 3 hours were positive or negative, a buy or short signal was triggered. The 3-hour interval was introduced to capture changes that occurred outside of market hours. Finally, changes in the stock prices for the model were evaluated and parameters were optimised to get the best % changes after a buy or short signal. If the buy/sell signal occurred outside of market hours, then we found the next valid timestamp.

During the modelling stage 8 out of 11 buy/sell signals resulted in the correct prediction of the price within 90 minutes. All predictions of the movements of the stock prices were checked against the stock price supplied by Yahoo Finance. It is also worth noting that during the modelling stage, the greatest percentage change occurred after 90 minutes of the transaction. Next, when we considered the validation dataset where 7 out of 9 signals were found to be profitable. One of the most successful trades included a buy signal when the market opened on 18th Oct where we saw a 6.98% increase after 90 minutes but most % changes were around the 0.9% mark. After conducting a hypothesis test using an equally distributed binary variable at a 10% critical level, the null hypothesis that the probability distribution is p=0.5 was rejected and there is sufficient evidence to suggest that the average number of correct predictions based on the trading strategy outlined is above 50%. However, this is a very small sample size and so constraints on the signals should be relaxed in order to increase the number of transactions or include another month in the backtest. It was also disappointing to see that the spike on 28th Oct wasn’t captured under the proposed trading strategy, most likely due to the short window of the EMA. Overall, predictions based on stock sentiment data showed promising results but this strategy, even though it was using hourly data, gave too few executed signals. Hence, to raise the validity of the conclusion a larger sample size is required.

If you take interest in Coinbase or are a user of the platform, you will likely be investing and trading in cryptocurrency. Harness the power of StockGeist.ai’s platform by viewing real-time crypto sentiment analysis to gage how traders are feeling towards a certain coin. Alternatively, you can include our data into your own projects via our crypto sentiment API.

Disclaimer: This report and analysis of Coinbase’s stock was performed to determine whether trader sentiment in the form of positive messages detected by StockGeist translated into an increase in stock price, and whether negative messages translated into a decrease in the stock price in this article’s analysis. Please note that this analysis is not investment advice.